Thirty-six years ago on a small farm outside of St. Louis, 4-year-old Barrie Cooper learned how to play the violin using a ruler and a macaroni box.

Today, as the first chair violinist of the Memphis Symphony Orchestra, 40-year-old Cooper sits in her living room in Memphis, rehearsing for the orchestra’s upcoming concert series with her Pirastro Gold violin resting under her chin.

Cooper rehearses for a minimum of four hours alone in her home every day.

The series, entitled “The Planets” and running Nov. 7 and 8, is the second of 10 concerts in the 2015-2016 season. The season started in October and will run until May.

In addition to being the first chair violinist, Cooper is also the concert master, which means she is in charge of the entire string section.

“Barrie is like my technician, the liaison of the group,” Mei-Ann Chen, the orchestra’s director, said. “I count on her to make things happen.”

While Cooper does make musical things happen on stage, she admits that a big part of her job is maintaining the morale of the orchestra.

“During the time of the new contracts, there was a lot of tension flaring in up the group,” Cooper said. “As a leader, I’ve had to absorb much of that tension.”

Cooper said today she enjoys her leadership position, but she wasn’t always an outgoing people who was comfortable leading others.

As a child, Cooper was shy and apprehensive to talk to strangers. So instead of talking, she said she used her violin to express herself.

“Talking didn’t always come natural for me, but music did,” Cooper said. “I used my violin to speak before I was brave enough to speak up for myself.”

For Cooper, music was a natural fit. She was introduced to music at a young age, spending hours listening to the Beatles and the other musicians in her parents’ sizable record collection.

“My parents were hippies who loved music,” Cooper said. “That’s where it all began for me.”

Cooper started playing the violin professionally soon after graduating from college at Johns Hopkins Peabody Conservatory and has maintained a career in music ever since.

Other than lifeguarding in college, music is the only job she’s ever had. Before joining the Memphis Symphony Orchestra, Cooper worked as a music teacher in New York, played in festivals in Vienna, Austria, and performed with other professional orchestras throughout the country.

“There is something about music,” Cooper said. “It’s an odd way of touching people.”

Cooper’s love for music is not the only thing she carried with her from her childhood on the farm. She also took with her an affinity toward animals.

“For Barrie, it’s always been music and animals,” Lora Cooper, her sister, said. 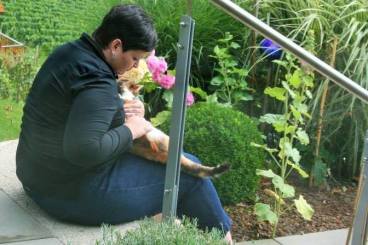 Cooper sets aside time in each day to spend quality time with each of her 6 pets.

Back in Cooper’s home while she rehearses, her four cats and two dogs sit perched nearby, listening to the familiar sounds of bow against string. Stevie, the pit bull, lies in the middle of the room and is part of the menagerie.

Cooper spotted the dog three years ago on the side of the rode, bruised, bloodied and near death. She gave him a home.

“One thing I love more than playing my violin is taking care of animals,” Cooper said. “I cannot stand to see an animal suffer and not do anything about it.”